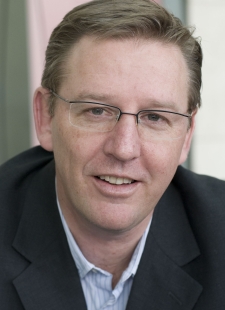 As we speak, Jim Loftus is sitting on a terrace overlooking the Parthenon with a lit cigarette and a glass of whiskey. After telling me this, he jokingly asks me to tell him where I am, so I give him a brief description of my creaky, old modular housing. We both agree that he's got the better end of the proverbial stick.

Far-flung locations, conversations conducted like a Beat poet, and a sprinkling of joking comments and profanity seem to be Jim's modus operandi. Even before we get into the details of what he somewhat mockingly calls his "career path" (you can practically hear the quotation marks when he says the words), his off the cuff attitude gives him away—I get the sense that it's something he never could have planned, or even tried to.

Currently serving as Senior Staff of Operations to Secretary of State John Kerry, I spoke with Jim both about the political consulting positions that have landed him in the White House and the foreign Parliaments and as his award-winning indie film, Trade Routes. Any of his achievements could have been the culmination of a planned career path, but Jim says, “I’ve never had careerist aspirations, really, it’s just randomness. I randomly went out and volunteered for a presidential campaign 30 years ago and then this movie thing, you shoot what you know.” Laughing and taking a sip of whiskey, he adds, “it’s a lot of intense, very hard work that kills you… but it’s like, who gets to do this shit?”

Jim’s foray into government work started when he was a “young, sort of idealistic reporter,” reading Hunter S. Thompson’s Fear and Loathing on the Campaign Trail ’72. He tells me, “I remember thinking, ‘that sounds like fun.’ And it is, running away with the political circus. It’s fun. This has become the thing that I do with my life: so many goddamn campaigns that it’s ridiculous!” And he has done a remarkable number of “goddamn campaigns.” Enough to move from “holy shit, we are actually going to work in the White House” after his first winning campaign with Clinton to “what, am I going to work in the White House again? I’ve done that” after Obama’s election. At some point, even the job that feels like running away to the circus can run you into the ground. 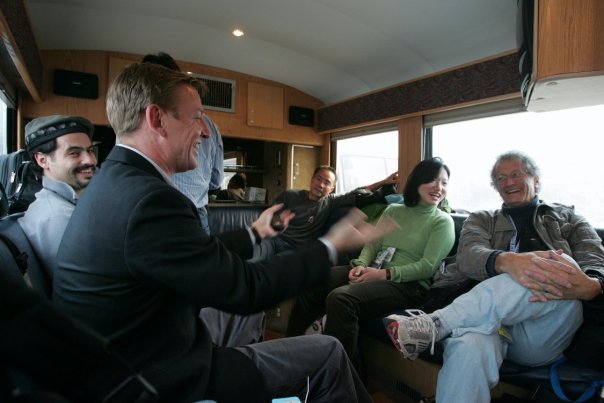 Between 2003 and 2005, Jim was writing what would become Trade Routes as a novel while bouncing back and forth between Bulgaria and the United States for various consulting jobs and political campaigns. Eventually, he says, “I was exhausted.” So, like anyone looking to break from a crazy work schedule, he decided to make a movie and exhaust himself “in a different way, using a different part of my brain.”

Describing it as both “a parody of U.S. intelligence and how they operate overseas” and “a sort of black comedy political drama,” Jim’s story is composed of equal parts embassy experience, knowledge of government proceedings, and imagination. Jim is chock full of anecdotes from the set of Trade Routes and listening to them gives me a real sense of his passion for the project. He says he fictionalized some of his interactions with friends, getting a kick out of making fun of them in a way that fit within the world of his film. His friend’s children even make an appearance in the film, recreating a scene in which Jim (Tim Knight in the film, played by Ross McCall) taught them to say “George Bush is a stupid monkey boy.” I can practically hear him shrugging over the phone, saying, “they spoke some English so I thought one of the first things they should learn was to mock the American President.” 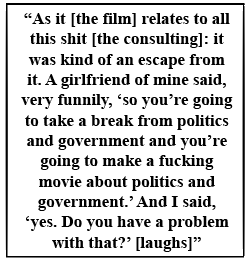 Other stories include a self-deprecating response –“ the writer is a vainglorious, drunken lout and will not be allowed on this set”—to an overly deferential actor early in the filming process and a teasing rejoinder to an actor who wouldn’t stop winking—“ I just went up to him in a very passive aggressive sort of way and went, ‘so, you like the whole winking thing?’ and he looked at me and goes, ‘alright, I get it, lose the wink.’” These stories highlight something about Jim that I believe to be a key factor to his success in both spheres of influence: his ability to communicate effectively while poking fun, to put people at ease in order to get a job done. 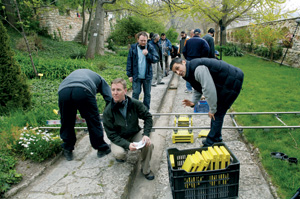 Of course, his endless work—see: “break” turning into a stressful film production spanning several years—and willingness to compromise share in this success. There’s something indefinable about an individual so competent in his position that you can complete the work and leave feeling that you’ve had an amazing conversation with a friend. While I’m sure that isn’t how Jim comports himself in every situation (he works for the United States’ chief foreign affairs adviser and there haven’t been any international scandals regarding a foul-mouthed American recently), video and written interviews show the same intensity towards politics and government as I’ve observed regarding his filmmaking.

Nearing the end of our conversation, Jim acknowledges, “it’s not a rational, logical progression. I can look at this objectively and say, ‘oh, yeah, you’ve had a really fucking crazy career’ but it doesn’t feel crazy at the time. I’ve been doing this shit for 20-something years and it doesn’t feel like a ‘career’… and that’s great I guess.”

But, because it doesn’t seem to be in his nature to leave a conversation on such a serious note, he actually ends our conversation with “and I’m sitting here looking at the Parthenon. So there!”♦

Trade Routes can be viewed on Amazon here, free with Prime.
Posted by smilingrid at 12:26 PM No comments: